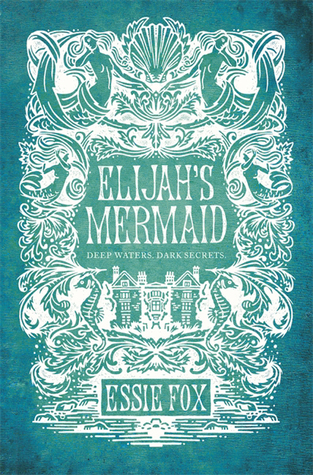 Elijah’s Mermaid pokes its flickering tongue into the darkest corners of every trope of childhood imagination: mermaids, disfigured beauties, orphans, dirty old men and a castle eroding as the dust and ivy gradually “…smothers the house façade, penetrating the mortar and rotting the frames….”

Alluring and creepy in turn, this fearless novel busts through the boundaries of girlhood fantasy, bringing Victorian gothic into the twenty-first century.

“His breaths created a fug all their own, the air in that cab become just as dense as the mists of rain that hung outside… A sleety rain glistened over iced pavements which shone in the glow of the carriage lamps, and the gutters that lined the sides of the road bubbled with froths of marbled slime.”

In a forbidden freak show tent Lily and Elijah, orphaned twins living with their bitter grandfather, encounter ethereal Pearl, web-toed and luminous, little knowing she will change their lives. Pearl is an orphan herself, rescued by a veiled Madame only to be auctioned off when she comes of age in the brothel she calls home. Her subsequent bondage to a psychotic painter obsessed with water gives purpose to nearly everyone else in the book as they seek either to exploit or to free her.

“I hardly know how to commence this post which is proving to be the most onerous task, and far be it from my intention to wish to cause you more distress than that you have already suffered.”

Occasionally I stumbled over a critical mass of Victorian clichés:  a child’s treasure basket of birds’ eggs and feathers, a room full of pickled foetuses, the tortured artist and the whore with a heart of gold. She even out-Dickenses Dickens with a version of Fagin with a lewd pet monkey the original surely should have had. But because we’ve seen all this before, ironically it only undermines the authenticity of the present story.

Fox’s work has been likened to that of Sarah Waters, but Elijah’s Mermaid is not as tightly told. The book loses concentration in places, meandering around the period setting Fox so clearly enjoys and thus crowding the end of the book with the plot’s many otherwise clever twists. I also found disappointing the persistent casting of female characters as powerless victims of men’s sadistic libido – surely a missed opportunity to turn that Victorian trope on its head?

Despite this, the novel is engaging and unique, and still haunts me with its eerie vibrancy of setting and sharp, vibrant characters. If you can stomach it, this fairy tale for grown-up little girls will take you into a something like a peep show onto your own darkest imaginings – perhaps hard to watch, but equally hard to turn away from. As Lily put it, “One morning I fully expect to wake and find ourselves trapped in its dark embrace;  imprisoned inside our own castle, locked up in a fairy tale.”

Elijah’s Mermaid was published in May 2013. Buy it from Foyles.

Paige Sinkler is an award-winning writer and photographer currently completing her MA in Creative Writing at Kingston University. Her work has been published on and in magazines like Litro, Every Day Fiction, The View From Here, Obsessed with Pipework, alliterati, Cursive Script and others. She blogs on writing and also contributes to Litro Fuel. More at www.paigesinkler.com / @pfsinkler

Any cookies that may not be particularly necessary for the website to function and is used specifically to collect user personal data via analytics, ads, other embedded contents are termed as non-necessary cookies. It is mandatory to procure user consent prior to running these cookies on your website.